By Harris GoldsteinFebruary 3, 2019 No Comments 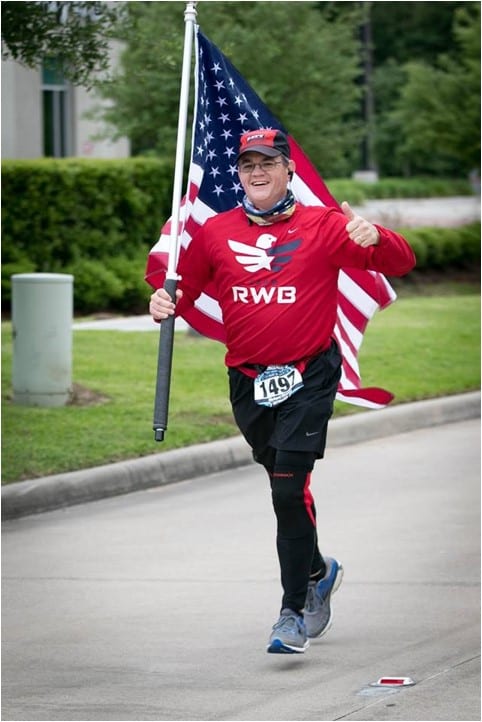 Gene met Mike in January at the Houston Marathon with Aftershokz.  When Gene sent out the bat signal that he was coming to town, Mike replied with an amazing story that we had to share here.

Hailing from just outside Houston, Mike had quite a busy 2018 logging over 1500 miles throughout the year! As if this wasn’t impressive enough, Mike had no previous running experience before January of last year!

After serving in the Air Force from 1992-2000, Mike currently serves in the Texas State Guard along with working for a Houston based anchor business. “I am the CEO of Bee Right There Anchor Services.”

Several years removed from military service Mike was not much of a runner. “Originally, I was not interested in running because I was overweight. At 5’-9”, I reached 260 pounds; I asked my brother Frank Murphy, a certified running coach, how I could lose weight considering I had no time for exercise or training. His advice was to see a nutritionist and limit my calorie intake based on the professional advice they provide.”

A change in diet resulted in Mike losing an incredible 80 pounds. “My original goal was to get back into military standards (195 pounds). From March of 2017 to January of 2018, I achieved this goal without any exercise at all. Now that I was within military standards, I COULD run.”

Mike then decided to enter a half marathon on a whim. “My sister asked me if I would do a half marathon with her. I had no training, no interest in running, nor any commitment beyond this single event. We agreed our approach would include a lot of walking, so I was willing to “run” it with her. We finished in just over 3 hours and 48 minutes.”

The completion of his first race set in motion of a series of events with Mike entering into another race the following weekend. “The next weekend I entered another event to see how fast I could run it if I just pushed the limits, now that I knew what to expect. With a finish time of just under 3 hours, I was hooked. Over the next 18 weeks, I had completed 12 half marathons, an 8K, 10K, 15K and a 10 mile event.” Mike continued to up his mileage throughout the year, completing a jaw dropping 17 half marathons, 4 full marathons and 2 ultra marathons (the longest of which was 66 miles) before the years end! He most recently completed the Houston Marathon on January 20.

While Mike’s fitness journey is special in that he hasn’t experienced a single injury since rapidly increasing his distances throughout the year, he is distinctly unique in that he uses each race as a chance to honor American heroes. “In every event I carry Old Glory in honor of a specific Veteran, Hometown Hero, or Patriot.” Mike completes each and every race while holding an American flag, with the names of those being honored, the date and the distance logged written on the left-hand side of the flag. 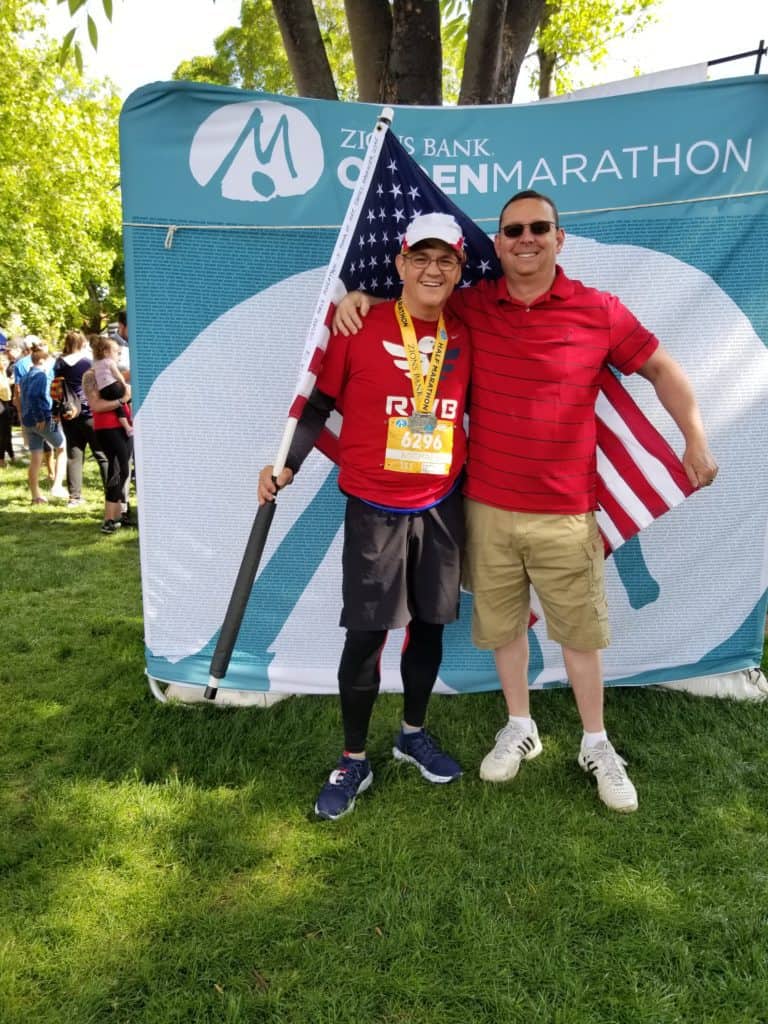 “After each event, I send or present the flag to the honoree or a suitable family member if the honor run is posthumous. The miles are more meaningful when they are ran for a specific person as a tribute to their enduring service. A lot of times people come and go and never get a “thank you”.” Carrying the flag in each race is Mike’s special way of honoring the sacrifices of others.

He made the decision to carry the flag for the first time after watching his brother Frank carry a flag of his own in a previous race. He remembered the feeling he got while watching his brother carry an American flag and he wanted to share that feeling with others. For his first half marathon in Sugar Land, Texas Mike decided to honor his father. A fellow Air Force veteran, Mike’s father was supposed to take part in the race but was sidelined due to back surgery. Mike took the opportunity to honor his supportive father, presenting him with the flag after the completion of the race.

Mike’s most meaningful run occurred in Connecticut when he was approached by a woman who asked if he was carrying the flag for somebody in particular. Upon conversing, Mike had learned that the her son was a Navy SEAL who was killed by a roadside bomb while serving in the Middle East. He decided to honor Petty Officer 1st Class Jason Lewis the following race.

“Night trail runs are the only real challenge when carrying the flag. Trees do not stand reverently at attention as I approach them. Some flags have been scarred by low hanging branches.” Although it poses some challenges, the positives of carrying the flag certainly outweigh the negatives for Mike. “Generally, I think carrying the flag actually enhances my overall performance. For example, at the Houston Marathon at the last water aid station a group of about 5 kids started singing the National Anthem as I approached. I was overcome with pride in our country, and so deeply appreciative of their patriotism. Naturally, I stopped, held the flag high and saluted while we sang the anthem. I probably lost 90 seconds, but the inspiration that followed was so motivating, every stride that followed was stronger, longer and more determined than my pace before the encounter.” 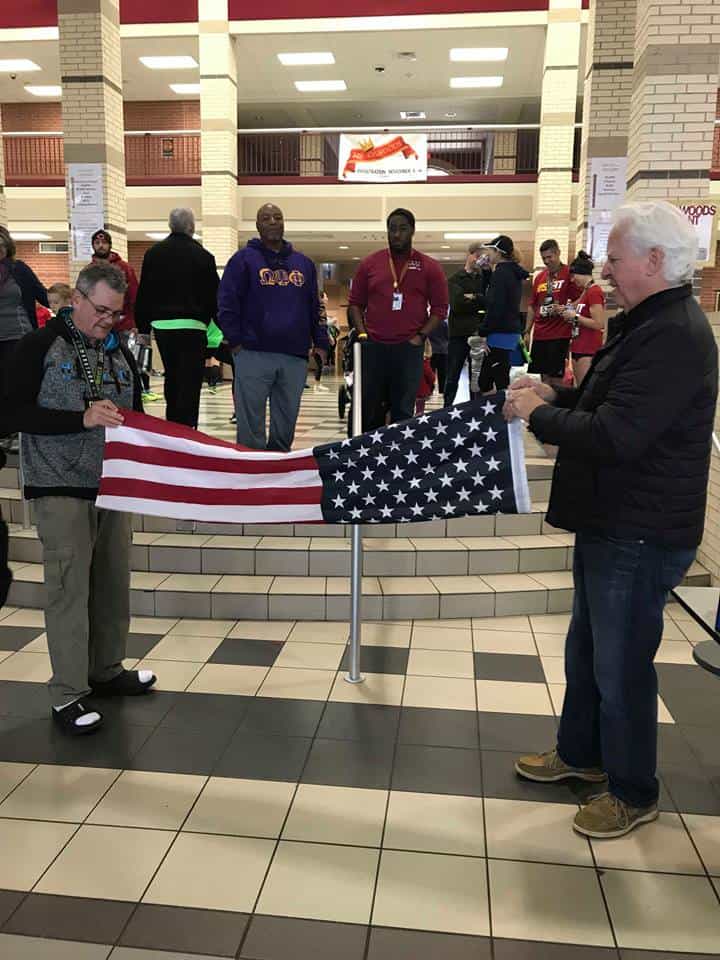 Although he has accomplished so much in such a small amount of time, Mike continues to aim high in 2019. His goals for the year include “Continue running injury free, finish every event I enter, complete at least a full marathon every month and complete all the most prominent military marathons (U.S. Air Force Marathon, U.S. Marine Corps Marathon, Bataan Memorial Death March (sponsored by the U.S. Army).” Mike is even attempting an ambitious 200 mile event later this month!

With 72 hours to try and complete the incredible distance, Mike will honor 3 Gold Star families throughout the race. Each family will be honored for 24 hours while Mike moves toward the finish line. “I told each of the 3 moms  that I want them to be honored for what they do, not for what they’ve lost.”

Mike began using Charity Miles after stumbling upon a Facebook post in the Team RWB– Houston Chapter team page with which he is a proud member. “Charity Miles has an easy user interface, provides encouraging workout summaries, integrates with my primary fitness apps and is supported by generous sponsors.”

He finds inspiration to continue running through various avenues, including his father. “My dad, Fred Murphy, is 81 years young. He remains active in Crossfit and he ran the Galloway Half Marathon with me this past December. He will do a 24 hour endurance run in February – he inspires me because he knows his limitations and constantly challenges them.”

Furthermore, “The inspiration for running is rooted in my desire to recognize the contributions of others. The longer distances are alluring because they sound impossible to who I was and I enjoy proving to myself, the person I have become, it is able to do the [previously] impossible.” 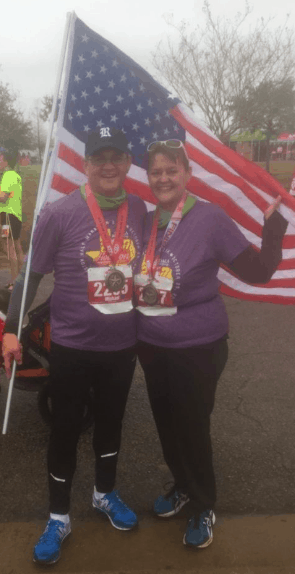 You can find Mike and old glory at the following events this year:

Please note the following honorees for whom Old Glory has flown high and proud:

You can keep up to date with Mike’s activities on Facebook and Instagram at “Honor Flag Runner”.

Thank you for all you do to honor America’s heroes Mike! It was great meeting you at the Houston Marathon.  Congratulations on a fantastic year and good luck achieving all your goals in 2019!

And of course, BIG thanks to our friends at Aftershokz for inviting us to Houston, sponsoring us, and hooking Mike up with a free pair of headphones! 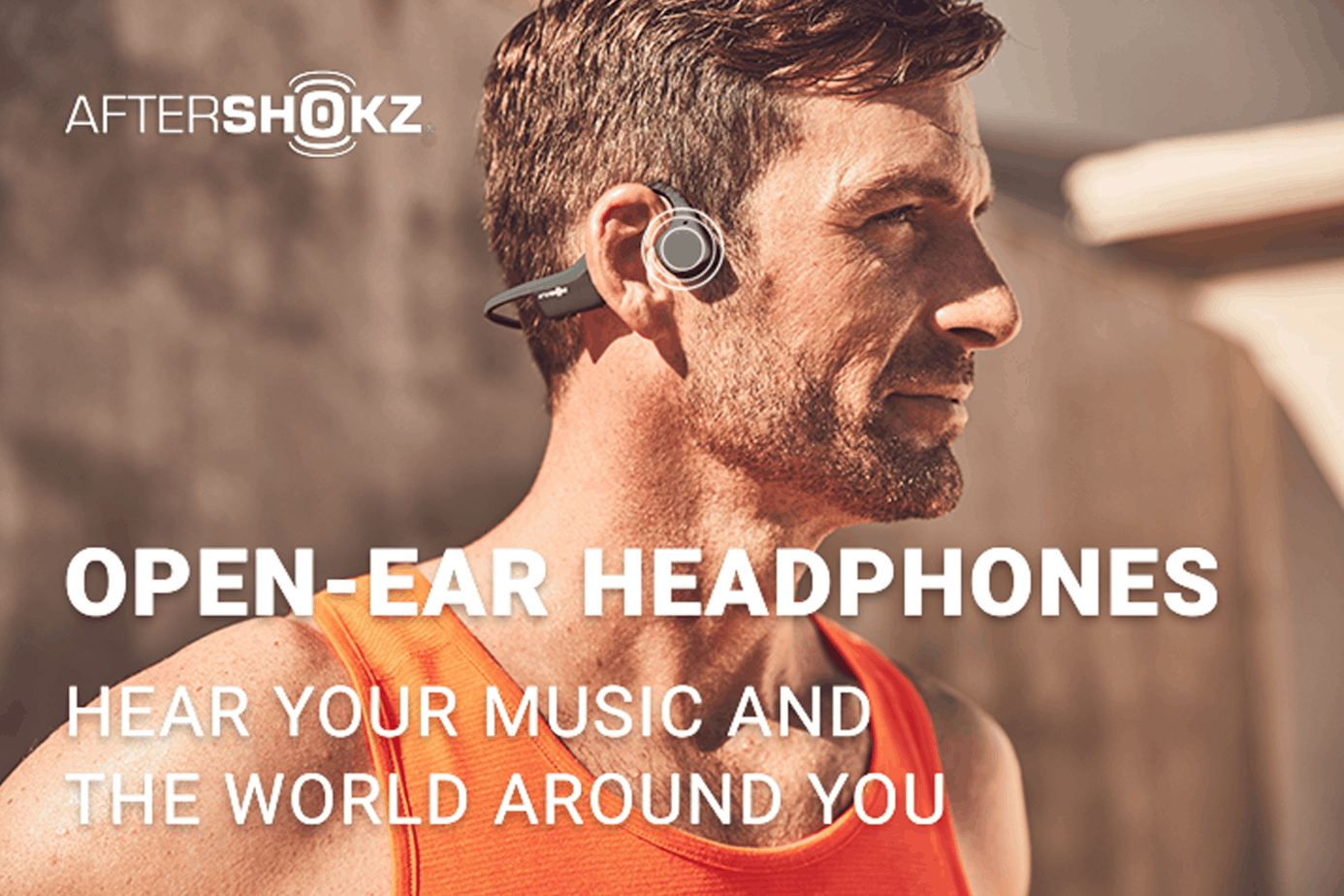