Everything I’ve done through Charity Miles has always been for the Leukemia and Lymphoma Society. I know that Megan still has lymphoma. I know there's no cure. I want a cure and I want it soon." 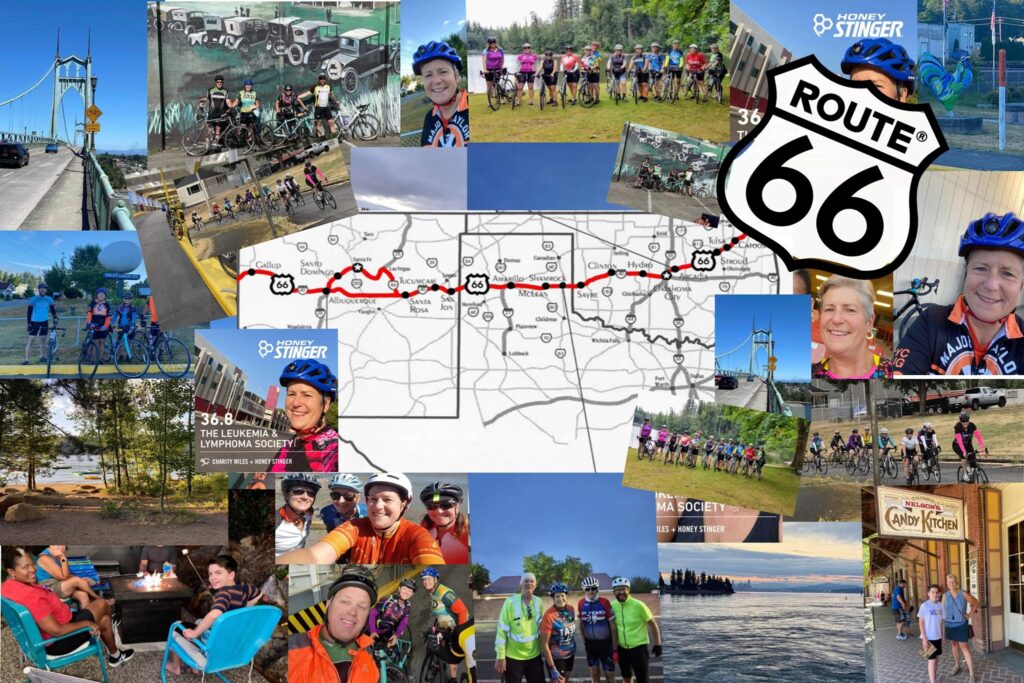 When Linda Dieckhoff saw a video of two Europeans biking Route 66, she knew she had to do it.

“I kept seeing older athletes doing amazing things in their seventies and eighties,” says Linda. With her 60th birthday approaching, she was thinking: “What can I do to kick off my next decade, and to maybe inspire people?”

Route 66 was perfect. Linda loves endurance cycling, and Route 66 was a big deal when she was a kid.

But she didn’t just want to do a ride for her birthday. Linda wanted to make it about something more.

“I asked myself, what can I do to make a greater impact in my world?” Linda says. “And the Leukemia and Lymphoma Society was just the obvious choice.”

“I want a cure for my daughter before she needs one.”

Linda’s commitment to the Leukemia and Lymphoma Society (LLS) goes back to 2014.

At that point, Linda was running with her daughter, Megan Landstine, all the time.

“We were doing a 5 K every month,” says Linda. “It was an excuse to hang out with my daughter. Afterwards, we’d go find a cool craft beer place and eat some good food. And then, you know, the 5 Ks weren’t enough. Then they were 10 Ks. Then they were 12 Ks. And the next thing, we’re planning for a half marathon.”

Linda and Megan did nine half marathons together, and decided to tackle a marathon.

One evening, after a rainy training run, Megan called her mother and told her she’d been diagnosed with non-Hodgkin type lymphoma. She waited until after the run to tell her, to make sure her mother knew she was still strong.

Nevertheless, the running stopped. They didn’t know if it would be safe for Megan.

“That was the last morning I woke up and didn’t think, ‘My daughter has cancer. What do I do?;’” says Linda. “I woke up with that feeling every morning for years. That’s my motivation for the partnership with LLS. I don’t want anybody else to ever have to think that. And I want a cure for my daughter before she needs one.”

The diagnosis didn’t stop Linda or Megan for long.

Linda got back into running and did two marathons, before shifting her focus to cycling.

After a lot of research, Megan got back into endurance training, too, and discovered a love of trail running.

“I decided to run one day’s section while I was hiking the Appalachian Trail,” Megan says. “It was the best day of all my three weeks there. From then on, it’s just been, how much further can I go?”

Megan’s next big challenge is a hundred-mile race. Right before Linda bikes Route 66, she’ll come support Megan through that race.

“We are definitely a family that likes to stay active together,” says Megan.

Throughout all their training, Linda and Megan have been using Charity Miles.

“Everything I’ve done through Charity Miles has always been for LLS,” says Linda. “I know that Megan still has lymphoma. I know there's no cure. I want a cure and I want it soon.”

Linda also had a step-granddaughter who is in remission from leukemia.

After years of supporting LLS, the Route 66 trip will be her biggest fundraising effort yet.

Linda is planning her trip for this summer. She’ll bike six days a week, for six weeks, 70 to 80 miles a day. The trip will end in Chicago, where Linda was born, and she’ll visit family she hasn’t seen in 17 years.

She’s been training hard, she says. “But I was still questioning, can I ride 2200 miles?”

“I could totally see myself getting on my bike later in the afternoon and riding the other 25 to make it a century ride,” she says.

And while Route 66 will be a solo ride, Linda will have lots of support from family and friends. Once Megan recovers from her hundred-mile race, she and her two young sons will drive along. Megan will be there both as Linda’s supportive daughter — and as Linda’s coach

Megan got into coaching in 2019 when she was pregnant and had trouble finding answers about what exercise was safe.

Her business, Happy Endurance and Running Optimization (H.E.R.O.), specializes in supporting women who are pregnant and postpartum.

“The name is Happy Endurance because I want people to find the joy in whatever they’re doing,” says Megan. “There’s no point going running or cycling if you’re not enjoying it.”

Megan adds, “One of my first clients was of course my mother, because she always supports everything I do.”

For the past year and a half, Megan has been writing training programs to help Linda prepare for this trip.

“It’s a team effort,” Megan says. “She’s putting in the work and I’m helping keep her strong. And it’s not just about physical strength, but mindset. A big part for me is, where does your mind go? And how can you control your mind? Because the mind wants to give up long before the body does.”

“I just want to make a difference.”

Linda has been reaching out to businesses and foundations of all sizes to raise money for LLS. She’s paying for the trip out of her own pocket, and sending every donation directly to LLS.

“I’ll be honest, I’m privately very competitive,” Linda says. “My secret goal is to raise more than him!”

If you’d like to help Linda reach her goal (or beat the Man of the Year!), you can donate here.

Megan says that, besides supporting her mom, “What I’m most excited about is taking my boys along, so they can see that you can do anything at any age. It’s a way for them to see how powerful the human body is and what we can do if we really set our mind to it.”

For Linda, her goal is simple: “I just want to make a difference. That’s all.” 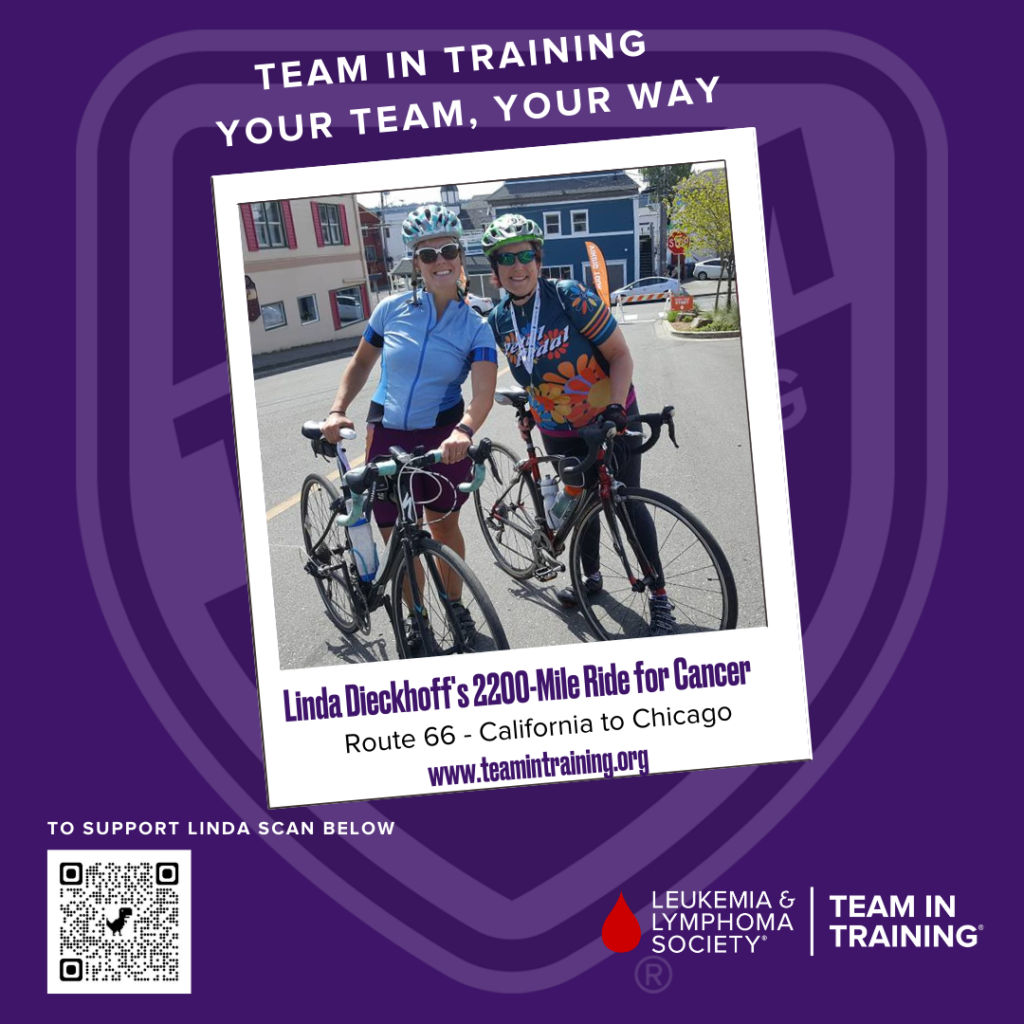